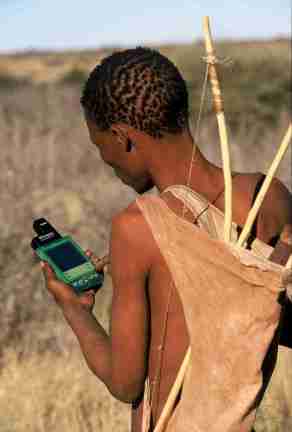 The Origin of Science

CyberTracker has grown from a simple hypothesis: The art of tracking may have been the origin of science. Science may have evolved more than a hundred thousand years ago with the evolution of modern hunter-gatherers. Scientific reasoning may therefore be an innate ability of the human mind. This may have far-reaching implications for indigenous knowledge, citizen science and self-education.

In 1990 I ran the persistence hunt with !Nate at Lone Tree in the Kalahari. The persistence hunt involves running down an antelope in the mid-day heat on an extremely hot day – chasing the antelope until it drops from heat exhaustion. This may well be one of the oldest forms of hunting, going back two million years ago, long before humans invented bows and arrows. Persistence hunting may have played a critical role in the evolution of the art of tracking and the origin of science.

In 2001 I worked with David Attenborough on the BBC film showing Karoha doing the Persistence Hunt. You can watch Karoha running down a kudu in the video at

Reviving the Dying Art of Tracking

After running the persistence hunt in 1990 !Nate asked me to help them. They could no longer live as hunter-gathers and needed jobs. Wildlife in the Kalahari has been decimated by fences that cut off migration routes. It was no longer viable to live as hunter-gatherers. And the art of tracking was dying out. After hundreds of thousands of years, traditional tracking skills may soon be lost. Yet tracking can be developed into a new science with far-reaching implications for nature conservation.

We had lengthy discussions around the fire, and it was decided that I should try to find a way to create jobs for trackers. Only by developing tracking into a modern profession, will tracking itself survive into the future. !Nam!kabe agreed that this will be good for the future. But he also had the wisdom to know that it will take a long time. This was for the younger generation, he said, it will not be for him. When he died in 1995 his exceptional tracking expertise was irretrievably lost. He was one of the last of the old generation hunters and one of the best trackers. !Nam!kabe inspired the creation of the Master Tracker certificate – the highest standard of tracking that others could aspire to.

The Tracker Evaluation methodology that I developed provide certification of practical tracking skills, thereby enabling trackers to get jobs in ecotourism, as rangers in anti-poaching units, in wildlife monitoring and scientific research. Tracker evaluations have since 1994 resulted in a steady growth of trackers with increasing levels of tracking skills, thereby reviving tracking as a modern profession.

The Tracker Institute was established as a centre of learning for the highest standards of excellence in the art of tracking and to develop the next generation of Master Trackers. The Tracker Institute is situated in the Thornybush Nature Reserve, providing the opportunity to track lion, leopard, rhino and a wide diversity of species. In addition to providing intensive individual mentoring of practical tracking skills, it will also serve as a research institute.

If the art of tracking was the origin of science, then modern-day trackers should be able to do science. However, some of the best traditional trackers in Africa cannot read or write. To overcome this problem, the CyberTracker software was developed with an icon-based user interface that enabled expert non-literate trackers to record complex geo-referenced observations on animal behaviour.

In 1996 I teamed up with Justin Steventon, a brilliant young computer science student at the University of Cape Town. The CyberTracker user interface was developed with the help of Karel Benadie, a tracker working in the Karoo National Park in South Africa. Together with fellow ranger and tracker James Minye, they tracked the highly endangered Black Rhino, recording their movements and behaviour in minute detail. Together we published a paper on rhino feeding behaviour in the journal Pachyderm. This is perhaps the first paper based on data gathered independently by two non-literate trackers, confirming a hypothesis about rhino feeding behaviour put forward by the trackers. It was a demonstration that non-literate trackers can do science.

In 2008 the Western Kgalagadi Conservation Corridor Project was initiated, funded by Conservation International for a three-year period. Community members from several villages were employed to use the CyberTracker to conduct track counts. This was the first time that !Nate and Karoha were employed in a major research project, enabling them to use their traditional tracking skills, using the CyberTracker, in a modern context.

You can watch Karoha using the CyberTracker in the video at

Video: Tracking in the Cyber Age

Towards a New Science

From its origins with the Kalahari Bushmen, CyberTracker projects have been initiated to monitor gorillas in the Congo, butterflies in Switzerland, the Sumatran rhino in Borneo, jaguars in Costa Rica, birds in the Amazon, wild horses in Mongolia, dolphins in California, marine turtles in the Pacific and whales in Antarctica.

The CyberTracker story is captured in the powerful image of Karoha holding the CyberTracker, with his hunting bag slung over his shoulder. The image symbolises the cultural transition from hunter-gatherer to the modern computer age. Persistence hunting may be the most ancient form of hunting, possibly going back two million years, long before the invention of the bow-and-arrow or the domestication of dogs. After two million years, Karoha may well be the last hunter who has been doing the persistence hunt. Yet of all the hunters at Kagcae, Karoha is the most proficient in using the CyberTracker. In Karoha, one individual not only represents one of the most ancient human traditions, but also the future of tracking with computers.

Karoha’s story represents the most profound cultural leap – a story that gives hope for the future: The ancient art of tracking can be revitalized and developed into a new science to monitor the impact of climate change on biodiversity.