In response to recent discussion about terminology, we propose “tracking science” as a term that is more inclusive than citizen science. Our suggestion is set against a post-colonial political background and large-scale migrations, in which “citizen” is becoming an increasingly contentious term. As a diverse group of authors from several continents, our priority is to deliberate a term that is all-inclusive, so that it could be adopted by everyone who participates in science or contributes to scientific knowledge, regardless of socio-cultural background. For example, current citizen science terms used for Indigenous knowledge imply that such practitioners belong to a sub-group that is other, and therefore marginalized. Our definition for “tracking science” does not exclude Indigenous peoples and their knowledge contributions and may provide a space for those who currently participate in citizen science, but want to contribute, explore, and/or operate beyond its confinements. Our suggestion is not that of an immediate or complete replacement of terminology, but that the notion of tracking science can be used to complement the practice and discussion of citizen science where it is contextually appropriate or needed. This may provide a breathing space, not only to explore alternative terms, but also to engage in robust, inclusive discussion on what it means to do science or create scientific knowledge. In our view, tracking science serves as a metaphor that applies broadly to the scientific community—from modern theoretical physics to ancient Indigenous knowledge.

In 1996 we developed an Icon User Interface design for handheld computers that enabled non-literate trackers to enter complex data. When employed in large numbers over extended periods of time, trackers can gather large quantities of complex, rich biodiversity data that cannot be gathered in any other way. One significant result in the Congo was that data collected by trackers made it possible to alert health authorities to outbreaks of Ebola in wild animal populations, weeks before they posed a risk to humans. Trackers can also play a critical role in preventing the decimation of large mammal fauna due to poaching. Collectively, the seven case studies reviewed in this paper demonstrate the richness and complexity of scientific data contributed by community-based citizen science. Furthermore, trackers can also make novel contributions to science, demonstrated by scientific papers co-authored by trackers. This may have far-reaching implications for the development of an inclusive citizen science. Community-based tracking can significantly contribute to large-scale, long-term monitoring of biodiversity on a worldwide basis. However, community-based citizen science in developing countries will require international support to be sustainable.

The year is 2001 and this is Central Africa. Reports are trickling in about an Ebola outbreak. The outbreak is unanticipated. Data for tracking and predicting the spread of the outbreak are scarce. Lives are at stake. What do you do?

CyberTracker is a downloadable desktop software application developed to assist non-literate wild animal trackers collecting data about animal movements and behavior. CyberTracker, developed by Louis Liebenberg, Associate of Human Evolutionary Biology at Harvard University and Justin Stevenson, lead software developer, is a participatory citizen science project. Trackers reported data on gorilla and other wildlife in Central Africa at the time of the 2001 Ebola outbreak. The European Commission was funding part of the project at that time and turned to CyberTrackers for help.

“One of the great features of CyberTracker software is that it was developed with an icon-based user interface that enables expert non-literate trackers to record complex geo-referenced observations on animal behaviour,” says Louis Liebenberg.

“Unfortunately CyberTracker data are not yet available online. Cybertracker does not have an online back-end, which makes it impractical for citizen science projects, since it is not easy for citizens to get access to the data. Instead, data are stored in a physical Access database on individual PCs or, in MySQL, MSSQL Server, or PostGreSQL databases on a server. That’s where we come in,” says Greg Newman, a scientist with the Natural Resources Ecology Laboratory.

That ‘we’ is the team at Colorado State University’s CitSci.org. In 2007, while CyberTracker software was continuing to be used to alert health officials of Ebola outbreaks, researchers at CitSci.org were busy developing an online platform to allow people around the world to create their own online, open, and easily shared citizen science and community based monitoring projects. They set about developing a platform that allows individuals and groups to create and customize their own citizen science projects in much in the same way that CyberTracker users configure their own apps.

So – it comes to no surprise that these two innovators – CyberTracker and CitSci.org – eventually became aware of each other’s work. They formed a collaborative team and recently received a $1 million grant from the National Science Foundation’s Software Infrastructure for Sustained Innovation Directorate, SI2-SSI entitled Advancing and Mobilizing Citizen Science Data through an Integrated Sustainable Cyberinfrastructure, to integrate these two innovative software systems.

This new collaboration between CyberTracker and CitSci.org (dubbed the cyberFABRICS project) is novel in the rapidly growing field of citizen science because it focuses on integration of existing systems and interoperability between existing systems. Rather than build yet another platform or app or desktop software application, this grant instead wrestles with the challenge of integrating existing systems in a plug-and-play way to amplify the utility and reach of existing software.

By making the millions of scientific observations made by CyberTracker users freely available and accessible online via CitSci.org – the grant will mobilize these important scientific datasets and empower others to combine them in what are called meta-synthetic studies to generate novel findings and advance knowledge. Additionally, by extending the capabilities of CitSci.org to support the icon-based user interfaces of CyberTracker –  the reach and utility of CitSci.org will also be amplified – allowing the platform to better serve anyone – regardless of their literacy, language, locale or age. Other examples of envisioned software integrations enabled through this project include automated sharing of CitSci.org and CyberTracker species observations with the popular and global iNaturalist network of voluntary naturalists and enthusiasts that vet species identifications and the sharing of fine-scale meteorological observations made by a network of rain-gauge monitors powered by the Colorado State University-based Community Collaborative Rain, Hail, and Snow Network (CoCoRaHS).

The results of this CyberTracker/CitSci.org partnership are due to be completed by October 2020. When that time comes, those alerting health officials of new Ebola outbreaks will be able to easily post their CyberTracker apps on CitSci.org for others to download and use to report new disease incidences. They will also be able to upload data captured by their CyberTracker apps to CitSci.org – making these data free and open for use by other scientists, partners, collaborators, and stakeholders around the world. The data may prove important for prediction of more than just Ebola. The creative sharing of software and data will open up opportunities to address a much broader array of locally relevant and globally important challenges.

Technology is allowing anyone to contribute to scientific research, with implications for conservation, disease prevention and much more.

Louis Liebenberg explains in The Guardian 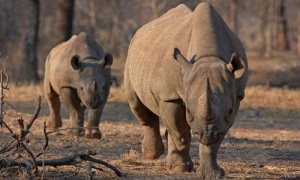