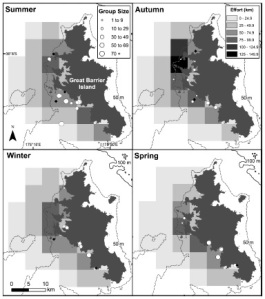 ABSTRACT: Conservation initiatives are typically constrained by economic circumstances, a factor certainly true for marine mammal conservation in New Zealand. Most research in this field has been conducted following concerns over anthropogenic impacts on populations and has therefore been funded and/or driven by stakeholder interest. Bottlenose dolphins Tursiops truncatus are classified as ‘Nationally Endangered’ in New Zealand waters. Here, we present the first study on occurrence, site fidelity and abundance of this species off Great Barrier Island (GBI), a previously overlooked region within the home range of the North Island population. Dedicated boat-based photo-identification surveys were conducted monthly from 2011−2013, resulting in 1412 sighting records of 154 individuals. Dolphins were recorded during all months of the year, with a higher probability of encounter in deeper waters during summer and shallower waters during winter and spring. Group sizes (median = 35, mean = 36) were higher than previously reported for this population in other regions. Individual re-sighting patterns were variable; however, overall site fidelity was high (mean monthly sighting rate = 0.33). A Robust Design approach resulted in seasonal fluctuations in abundance and temporary emigration. Based on a super-population estimate, 171 dolphins (CI = 162−180) visited the area during 2011−2013. Our data suggest that GBI is a potential hotspot for bottlenose dolphins of the North Island population rather than a corridor to reach other destinations. We highlight the need for researchers, managers and funding agencies to consider the entire range of a population when conducting or funding research.